Let me tell you a funny story.

Two Decembers ago, my boyfriend and I went to Austin and LA for the holidays and New Years. Excited to try some of the best BBQ and Tex-Mex in the country, I totally indulged, and it rocked. We were in Texas for 7 days, the first of which was at the Round Rock Outlets. One week later, upon landing in warm LA, the super cute American Eagle denim cut-off shorts I had purchased at the outlets LITERALLY did not fit me. I’m not kidding, they gave me a muffin top. Side note: thank you, Rent the Runway, for providing a complimentary additional dress size. New Years Eve could have been stressful. 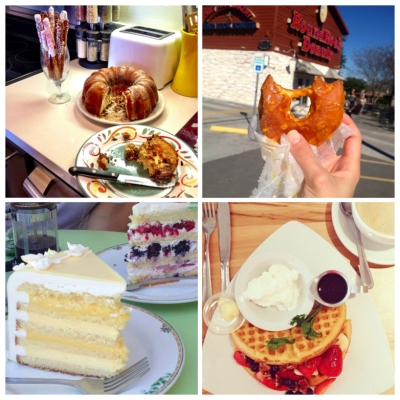 Back in New York, two weeks later and one size larger, I emailed my nutritionist to ask her to help me get back to where I was before the trip, in a way that was healthy and not restrictive. I specifically told her that jeans I had recently bought no longer fit me. In an effort to help me avoid trying to be a certain size, she suggested I buy new jeans.

Upon receiving her email, I began to cry, frustrated because I had already BOUGHT new jeans. You see, after working with both her and my therapist, I had gone up from a size too small (because of restrictive eating) to a size just right (thanks to a balanced diet). And she wanted me to go up ANOTHER size?! I was pissed, so I punished her. How did I punish her, you ask? By eating whatever I wanted.

Not one my most brilliant moves. So in our next session, I told her I didn’t like her response, we worked it out, and then focused on getting my shit back together. In so many words, she told me to follow an eating schedule.

This brings me to the next part of the multistep eating plan I presented back in January. Apologies, by the way, for the delay in posting step two. At least I’ve given you ample time to let the first one sink in, right? 🙂

To review, the main objective of the first idea was to stop dieting and restricting foods, and instead to consume a diet that is balanced overall. What… that’s not super simple?

What does this mean? It depends on how often you feel hungry, but I usually recommend this (this isn’t set in stone, but general guidelines):

Optional (but necessary for me): dessert

I’m sure you’ve heard “every three hours” before – this aspect isn’t exactly ground breaking. The difference here is that this is more intentional. In fact, a big part of this is having snack or meal at these intervals even if you’re not hungry yet. Give or take – for me, if it’s been 5 hours after a large meal, I’ll eat something even if I’m not hungry – although at this point, I’m usually starting to think about food again. After a typically heavy meal, like brunch or a holiday dinner, after which the tendency is to avoid eating much the rest of the day, the eating schedule is particularly important to stick to, because it will prevent you from feeling like you did something “wrong” at brunch and need to “make up for it” later on. It will also make it less likely that you suddenly get super hungry and then end up eating something heavy again.

Why does it work? Well, I don’t know about you, but whenever I begin to restrict in any way – even something as simple as choosing a salad instead of a sandwich (when I really want the sandwich) I suddenly can’t stop thinking about food. I’ve heard from a lot of people that dieting or any sort of restriction leads to a bigger focus on food. When can I eat again? What am I going to eat? This was an issue for me when I got back from LA and tried to clean up my diet a little bit. I focused on food a lot and ended up snacking too much between meals, or over eating desserts because I wasn’t satisfying my cravings during the day. So Laura (my nutritionist at the time) and I worked on getting me away from focusing on food so much. The eating schedule let me know that if I was thinking about my next meal, all I had to do was look at the clock and see when “lunch time” was. If I had eaten 2 hours ago, I knew I could eat again in an hour (if I was legit hungry of course I would have eaten, but usually it was more in my head than my belly).

But wait – there’s more! An eating schedule can also help you control daily calories. By staving off snacking until the right time, I avoided picking at food too many times during the day. Secondly, it allows you to fit cravings into your diet in a more controlled way. I’m not saying that you should eat cookies and donuts in between meals, but if I’m craving something dessert-like, and I know that craving won’t go away, I work it in as a snack instead of my usual (fruit & nuts, Greek yogurt, energy bar – yes, all those typical dietitian-y snacks). This is definitely better than overeating a number of healthier items before ultimately eating what I wanted in the first place. 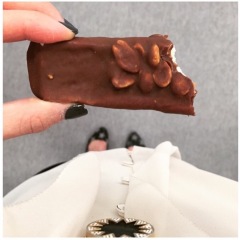 Mister Softee with nuts to fill me up

I want to clarify that I’m not suggesting eating at the same time every day, or that if your friends ask you to go to brunch you should say no because it doesn’t fit in with your new schedule – no need to go cray with this. This was originally meant to be included as part of a way to change your diet for the New Year – in a way that’s healthy and differs from a lot of the crazy eating plans out there. It’s perfect after a “big eating weekend.” When Monday rolls around and the temptation is high to eat clean, a schedule helps put you back on track without starving yourself. Alas, this post is way late for New Years. But – better late than never (that goes for your snacks, too 😉 )