I know Thursday isn’t Christmas, but this dessert is a little bit naughty and a little bit nice ;-). As always, I wanted to make a dessert that was healthy at its core, so you can get your sweet fix without feeling all the repercussions of a dish that’s super heavy in fat and refined sugars.

Enter, pumpkin chia seed pudding. Festive, seasonal, and filled with healthy fats, protein, and fiber. After some taste testing, my winning recipe is below – the vanilla soymilk is what did it for me. Though I used one with added sugar, with unsweetened milk it’s recommended to add sugar or syrup anyway, so this skips a step and makes for something really delicious. But you can use any milk you like for this (dairy, nut, sweetened, unsweetened). What’s nice is that you can also eat this without the topping for a healthy, filling breakfast (try with toasted pecans and pumpkin seeds).

Now for the topping. There was NO way I was skimping on this praline pecan topping. There are some things that are most beautiful in their natural form. This is one of them.

I started making these pecans about six years ago. I got the recipe from a Food Network pumpkin pie recipe. The only thing I adjusted was using salted instead of unsalted butter, which I swear, makes all the difference, because the salt from the butter with the super sweet brown sugar is e-ver-y-thing.

Regarding the whipped cream, I had wanted to make it from soymilk to stick with theme of a lighter dessert. The thing about whipped cream, though, is that it’s actual. Whipped. Cream. The fat is required to make it thicken, and soymilk just doesn’t have that. I could have added oil to it, but I kind of thought, “ew…” and stuck with tried and true. The whipped cream recipe is straight from an Alton Brown Food Network recipe (gotta love Food Network during the holidays, right?). And if you haven’t made fresh whipped cream before, well. You’ll see 😏

Note: You can let sit in the fridge overnight, so this is a great make-ahead dish

*I made way more than the serving listed above, so that’s what you see here. You think I made only ¾ cup of this stuff? Please. How would I be able to snack on it? 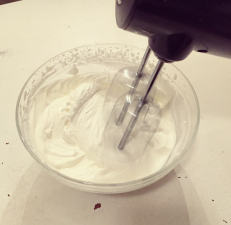 Now comes the fun part. Plating. I used a piping bag for the whipped cream, but you can cut the corner of a plastic bag and pipe it that way, or make it more rustic and spoon it on. The finished product is incredible. All three parts together make it taste like pumpkin pie, but the chia seeds will do wonderful things for you that traditional pumpkin pie won’t, which just another thing to be thankful for this week. 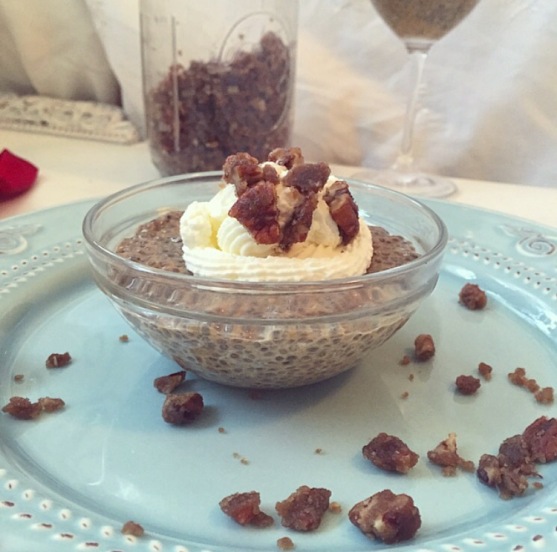